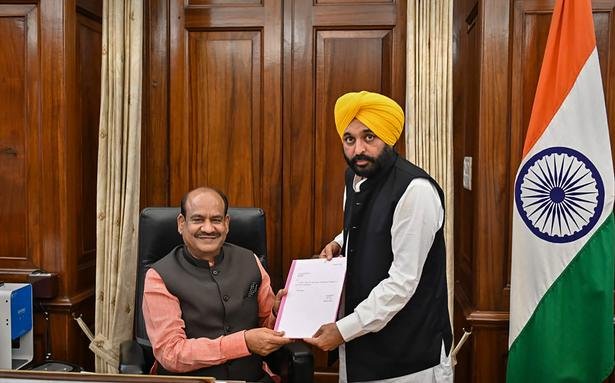 Bhagwant Mann, Chief Minister–designate of Punjab, resigned his seat in the Lok Sabha on Monday as he has been elected MLA in the recently concluded Assembly polls in Punjab and is set to be sworn in as Chief Minister on March 16. Sporting a yellow turban, Mr. Mann said farewell to Parliament and his parliamentary colleagues with a lot of affection, including Shashi Tharoor(Congress) and Bhartruhari Mahtab (Biju Janata Dal).

He met Speaker Om Birla and tendered his resignation from the Sangrur parliamentary seat, which he has represented since 2014. He was the Aam Aadmi Party’s only MP in the Lower House of Parliament.

On his last day in the House as an MP, Mr. Mann said he would be missing the House, and that “Punjab has given me a huge responsibility. I promise to the people of Sangrur that a bold voice for them will echo soon in this House.”

The Aam Admi Party (AAP) won a massive victory in Punjab, winning 92 of the 117 seats, and Mr. Mann had been declared its chief ministerial candidate during the campaign. He will take the oath at freedom fighter Bhagat Singh’s native village, Khatkar Kalan.

Maharashtra’s Matheran to get electric vehicles